Construction of the English medium school

The vision of a young teacher in Tanzania

Since the year 2015 we have been supporting the English medium school of the young teacher John Panga. At the end of 2016, a suitable piece of land could be purchased. In January 2017 the start of construction for the first rooms took place. In three classrooms, the lessons for just under 100 students are currently being held. The foundation walls for a total of six classrooms are completed.  A major obstacle in the education system in Tanzania is the linguistic hurdles faced by school children. At home, the respective tribal dialect-in Dareda to the example Kiraqw-is usually spoken in the family. From the first class, the children then learn the official language Kiswahili, in which the lessons are also held. However, as soon as they come to secondary school at the age of fourteen, the lessons are entirely in English. Many children understandably have a lot of difficulties, especially since in the first years of school only a few hours a week is taught English. In this way, they are deprived of a debt formation with a view to a good education or even study, with which they could then provide for themselves and their families. 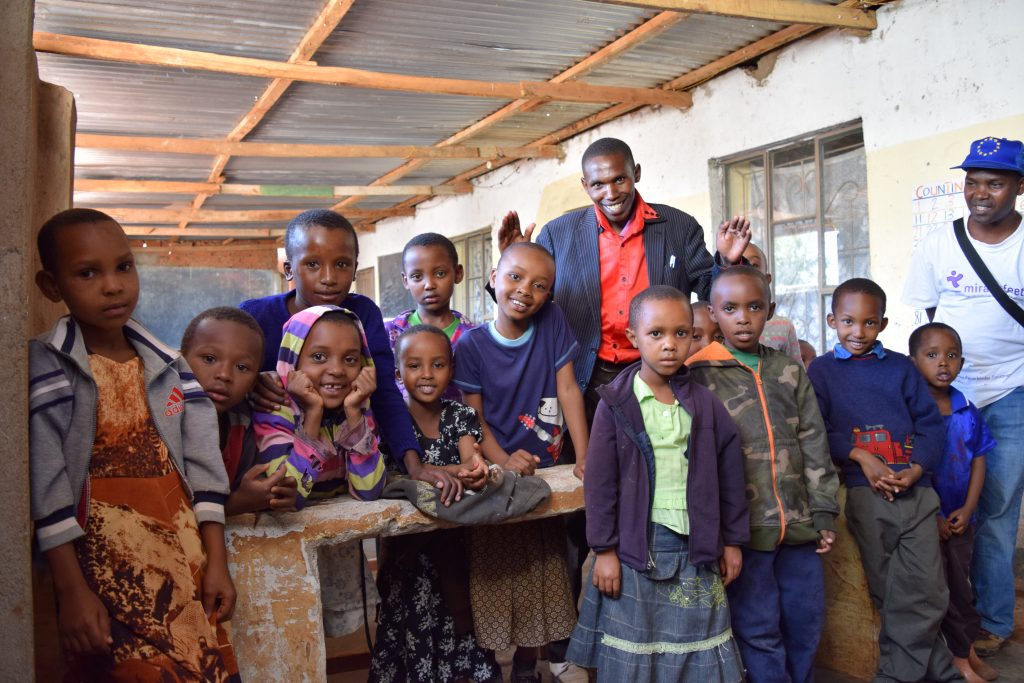 In recent years, so-called English medium schools have been established in Tanzania. From the kindergarten the complete lessons are held in English, of course with the exception of Kiswahili hours. The children thus have a very different opportunity to be successful in their further school career and to create a livelihood for themselves and their families. The young and dedicated teacher John Panga also founded the MPC – English Medium school in Dareda in the year 2015. Missing from all corners and ends, he rented an old, rundown classroom, and later a meeting room in the community to teach his disciples. The beginning was difficult, but the quality of the lessons, the dedication of the young teacher and his colleagues and their modern teaching methods quickly spread around the area. After a short time, a total of 40 children visited the newly founded school. Since these new schools are very rare in Tanzania, it was soon necessary to find accommodation for many of the students, as they may come from far away and not be able to drive home every day. At the same time, a small provisional boarding school with only one bedroom was created, in which the children had to share five or six beds without a mattress.

Start of construction of the first rooms in January 2017

After initial support of the school with the most urgently needed things like school benches, books or mattresses, 2016 decided to have a long-lasting, close cooperation. The aim was to move as quickly as possible to a suitable school building and site in order to offer a corresponding learning environment to the growing number of students. Shortly thereafter we were able to purchase almost two hectares of land for the construction of the school. In January 2017, during the visit of Timo and Sebastian in Dareda, the construction of the first two classrooms as well as a teacher's room began. Many parents of the students took part in their work and donated building materials to school construction. [Ngg src = "galleries" ids = "2" display = "Basic_thumbnail"]

The school continues to grow

In the spring of 2018, our two board members travelled back to Tanzania to continue the construction of the English medium school. In a short time the foundation walls for three more classrooms were created. The first building could be completed including a roof and a solar system. Shortly before the departure of Timo, Sebastian and Andrea, the first classroom could be inaugurated with a solemn ceremony. [Ngg src = "galleries" ids = "3" display = "Basic_thumbnail"]

With the help of our two volunteers Daniel and Chris, the sanitary facilities were completed in the summer of 2018. With a separate toilet facility for girls and boys, the school is well prepared for a growing number of students. [Ngg src = "galleries" ids = "1" exclusions = "9, 10, 12, 4, 5" display = "Basic_thumbnail"]

In January, our 1 was. Chairman Timo and His Companions Christoph and Andi on Site and have done an impressive Job in three Weeks.  Six classrooms are now covered at the English Medium School, two Of which are already being used together with a repurposed Office. The events are overblown and after 5 years you can see how LaKiTa is getting more and more far-reaching support. At the end of February, our 2nd Chairman Dr. Sebastian Röder with his girlfriend to Tanzania They provided a new coat of paint for the school and took care of the lessons, but as always the joy and the fun should not be neglected. We cannot display this gallery

In September, our 1st Chairman Timo Holub with Stephi to Dareda to complete the final preparations for the official registration of the school. For this purpose, the Temporary Food Edition was replaced by a brick dining room. The school also got its official logo, which imprecated the official representatives of the Ministry of Education – all necessary documents are now available to the authorities and we are eagerly awaiting a positive response from the Ministry of Education. But that wasn't all for this year – already in December our board Timo will fly back to Tanzania and we have some exciting projects – so it remains interesting what the next few weeks will bring! We cannot display this gallery